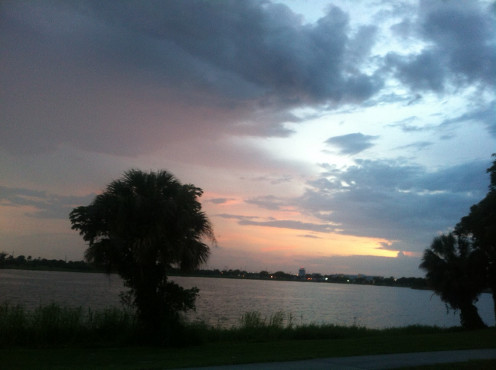 As I promised myself, I ran 10 miles yesterday 8/24 after nearly two years after my last long distance race. It was not an LSD running, it was more like run-walk. I made sure I walked after a mile for the first 6 miles (10-12 min pace). Then took a break to hydrate and replenish sugar. Then the next 3 miles were much slower and I walked every ½ mile. I still felt thirsty so after my final  hydration, I capped the last mile a little faster ending with minor quads cramp at the end.

Time was almost 2 hours based on my Garmin.

Man, I was a bit faster than that before. But then I was in my 40s then.

One thing I realized, especially now, is that Florida heat and humidity are unbearable at times. And I understand why my body lasts longer in parks: it has  brief intermittent shades offered by trees.

I can’t last the same distance on A1A despite its beautiful vistas. Unless I do the run very early morning or late afternoon, the A1A is so hot at 8 o’ clock onwards and without hydration, I’d most likely end with heat stroke :).

So my plan towards my next half-marathon is as planned. Yeah, I am getting excited again to get back to races.

I grew up in a world where everything I ate was cooked. Meat, fish, vegetables, rice were all cooked. That is why my taste for the prepared meals and manufactured food though receptive can not be trained for regularity. Sometimes my protein powder lasts for more than a month. Protein bars linger on the top of my refrigerator for months. Even my cereals end up in a similar fate. The only thing that I don’t cook is bread - even that I prefer to toast.

It is really a matter of taste and preference. I know people who eat nothing but raw food. I know athletes who rely heavily on protein shakes/bars out of necessity and lack of time. I am not saying I have lots of time to cook but through the years, I developed certain cooking habits that allowed me prepare meals that are fast and yes, I prefer them healthy.

I believe in the old concept of healthy foods: lots of vegetables and fish, less meat and fat. I used to eat lots of carbs but not anymore. There is no yoyo in this. The only yoyo I can think of in my meals is when I overestimate my ingredients especially meat. Being single, I consume it all instead of throw away. But that happens rarely.

I make sure that I have a steady supply of veggies and fish to control my meat and rice consumption. It doesn’t work all the time but it’s close. So I always cook my meat in a soup base - throw in chunks of pork, onion, pepper, salt, cabbage and spinach in a casserole of water to boiling - and there is my meal. When I eat, three fourths of my plate is made up of the cabbage, spinach and meat while one fourth is made of rice. It fills me up  but it’s the veggies that do.

My fish, I also boil until water is evaporated and the fish is soft and totally cooked. Then I pour in Olive oil until lightly fried. For this meal, I either combine fish with raw mushroom slices or raw spinach or boiled eggplants (I can also think of raw slices of radishes) mixed with tomatoes and then rice - and there is another heavy meal on account of veggies.

Every now and then I indulge in  sinful turkey hotdogs (high sodium content) and lots of eggs. That depends on my work-outs. Even my eggs I scramble with spinach, jalapeno, mushrooms, onions and tomatoes. In vegetable or olive oil.

I can go on and on with these combinations, altering the combinations here and there. And after the meals, I usually walk. And then in the morning, I run or jog.

These meals are sustenance and maintenance meals - not really meant for weight loss since I am already within the bounds of ideal BMI.

Ok - I haven’t talked about fruits yet.